"Keep the Knowledge, Lose the Pain."
2022 ART  Training Dates Added!
When I first heard about ART and its Voluntary Image Replacement, I thought it sounded like magic but I was curious,  I started to investigate this evidence-based practice, and found research, studies, testimonials, and a large and growing community of very enthusiastic clinicians. ​I wrote about some of my early ART experiences here:
Blog- ART Offers Fast Relief
Many clinicians ask, "Why should I train in ART?"
Read this Note from the Developer...
Initially, I was skeptical - until the practicums. It was then that I first got to be the "client" and the "counselor," feeling and witnessing the rapid healing power of the Basic ART​ protocol.
Client outcomes with ART were astonishing. Many problems that had required a lot of time with painful recollection and re-telling in sessions, were now resolved rapidly with visualization, deep breathing, and bilateral stimulation with the Basic ART protocol - in as few as 1 - 5 sessions.
After completing the requirements and additional trainings with the developer, Laney Rosenzweig, I became a Certified ART Facilitator. I began teaching Basic ART to other clinicians through The Rosenzweig Center for Rapid Recovery (RCRR) and ART International.

I've heard Laney say that what she loves about training clinicians in ART is that it will help more people. I feel the same. That's why I'm excited to share this valuable therapeutic tool with other clinicians. I use ART in my practice daily and often hear clients exclaim, "Why isn't everyone using this therapy?"
Endorsement from Glenn R. Schiraldi, Ph.D., Lt. Colonel (USAR, Ret.)
Case Vignette: 72 year-old traumatic memory resolved in one ART session

An 82-year-old woman who had just experienced her first and only panic attack following a surgical procedure on her face, requested an ART session. She was experiencing anticipatory anxiety about a second facial surgery and wanted to avoid taking medication if possible. She received one ART session in which she revisited and processed a memory from 1947 when she and her parents were injured in a serious automobile accident. During the session, she visualized images she knew were there, and some she did not, specifically seeing her 10-year-old injured face in the mirror with contusions and stitches. After one very strong emotional reaction, she expressed shock at the intensity of the grief she had been carrying for 72 years over the sudden changes and loss in her life.  Before completing the session, she revisited another time she had felt triggered but did not understand the connection. It was 9/11/2001 – the twisted metal of the steel beams were connected to her memory of twisted car metal. Following the session, she reported having a different perspective and feeling confident about the upcoming second facial surgery. After the surgical procedure, she reported having had no anxiety and no need for medication.

Thank you for allowing me to share your story.

Join over 6,000 therapists from around the world in adding Accelerated Resolution Therapy to your practice! 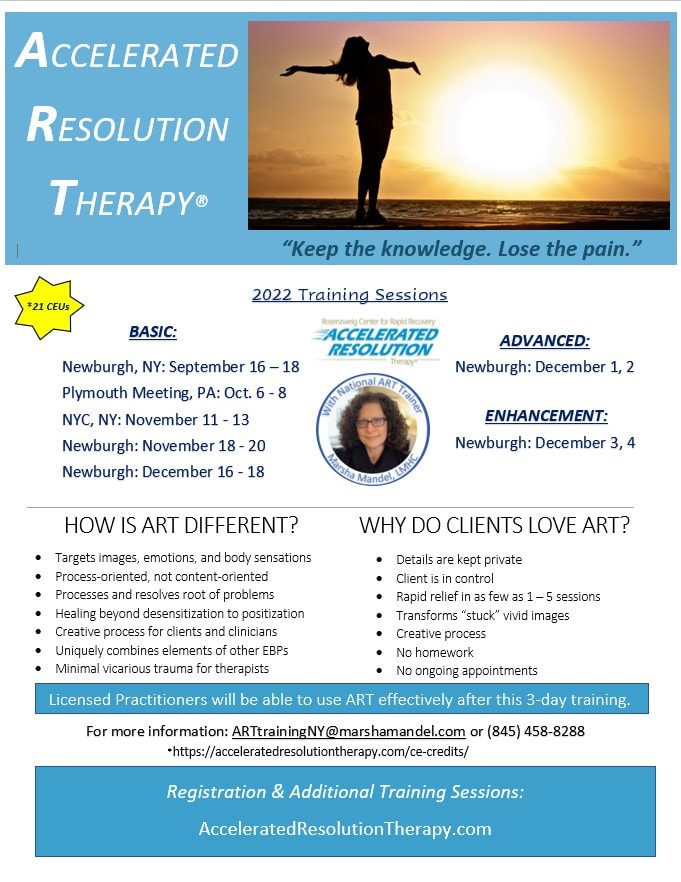